Update, 5/24/17: Hey! This is an old Nexus Siege guide. We've got a newer, updated one that looks way better over here. Come check it out!

Within the depths of the patch 6.14 patch notes Riot confirmed that the rotating gamemode for the next 2 weekends in a row would be the all new Nexus Siege. When you first heard of Nexus Siege you probably had some questions. So did I. After my first match of Nexus Siege on the PBE, I had the same questions, primarily, what the hell is Nexus Siege? Well I am glad that you asked, let's talk about it!

Nexus Siege is a two sided game mode, there is a attacking team and a defending team. Each match consists of 2 rounds. After the first round, the teams switch sides. The objective is simple: destroy the defending team’s Nexus as fast as you can or defend your Nexus for as long as you can.

When you are placed in a game lobby, bans take place just like they would in a normal draft game. Once six champions have been banned, it is a blind pick free for all. Still with me? Ok. So the weirdest thing about this gamemode is that summoner spells have been removed entirely. However, they have been replaced by siege attack or defense item/things that you can purchase mid game with a unique currency called crystal shards. We will get to this in a bit.

So the first thing that you will probably notice when you spawn in is that summoner's Rift looks a little different. The attacking team will always spawn into the blue side fountain, and the defending team will always be defending the red side nexus. The red side is pretty normal, except for the weird looking towers and the walls blocking some things here and there. However, most of the blue side is missing, lost somewhere in the fog of war, walled off from the parts of the map that you play on. 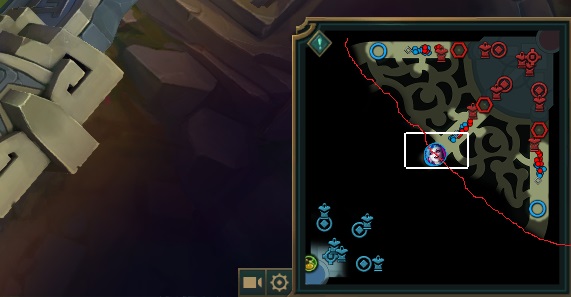 Since blue side can’t really walk to lane, players will teleport out of their base and onto warp pads. The defending team can walk to lane or use their teleporter to teleport right behind their tower. The attacking team has a miniature fountain sitting pretty close to where the tier 1 turrets usually are in the mid lane, top lane, and bottom lane. This is where their initial warp points will be and where their minions spawn.

Neither side needs to worry about farming because it won’t net you any gold. Gold comes passively and very quickly. So buy your items, warp into one of the three lanes, and push your minions into their towers. This is a skirmishing game mode, so you really want to pick a champion that can get into scrapes and get out. The ideal champion in this mode will have some kind of survivability, wave clear, and tower taking potential. ADCs seem to be ripe for this mode as they are ranged and can safely take down turrets fast. That being said, I got destroyed by a Rammus at one point, so maybe try that—don’t actually though, don’t be the guy who plays Rammus. Many champions will be able to find success, but if you really want to ruin someones day, look for mages (Ziggs), juggernauts (Darius/Garen), or completely broken ADCs that can build Youmuu’s Ghostblade (Lucian, Lucian, and Lucian are all great picks here).

Team 1 has twenty minutes to break through the tier 2 turret, Inhibitor turret, and Inhibitor in at least one lane before tackling both Nexus turrets and finally the Nexus. However long it takes them to destroy the Nexus will become the time to beat for team 2. If team 1 can’t destroy the Nexus in 20 min, the sides will automatically switch. When team 2 starts, they will see team 1’s destruction time where their game clock usually is counting down to zero. If they destroy the Nexus before times up, they win. If not, team 1 wins. What happens if neither team can do it in twenty minutes? I have no idea.

The one thing we haven't really talked about yet are the siege and defense weapons that replace summoner spells. They are different on each side so let's split things up shall we?

You place this spell down in range of an enemy tower (it won’t let you place it anywhere else) and the ballista will begin lobbing attacks at said tower. The ballista takes a second to charge and packs quite a punch. That being said, this siege weapon is weak, and just three auto attacks will take it out, so put it somewhere that you can protect it. Maybe the jungle? This was my go-to purchase for the first tower.

This banner basically gives minions in a large radius around it Baron buff. However, they lose it as soon as they step out of the radius. This is a lot tankier than the Siege Ballista but it is still a pretty good idea to stick it somewhere in the jungle in order to force your the enemy team out of lane. The Vanguard Banner is really great for beefing up your minions wave, especially if you are an AP champion who can’t 1-shot towers with their auto attacks.

This does what you think it should. You put it down next to other siege weapons and it gives them a shield. So maybe you see that your teammates have a pretty sweet setup in the east side jungle. They would all probably think that you were really cool if you dropped one of these down to keep their siege weapons going strong. What a team player!

You can put this anywhere you want and give your team another place to teleport to other than the makeshift fountains in the middle of the lane. This can be good for getting into the battle sooner late game or just getting a sick gank off on an unsuspecting side lane.

All of these items are purchased with crystal shards, which you will get passively over time and by killing enemy champions. A side note: do not under any circumstances allow defense side minions into your makeshift fountains or you will get obliterated by...

So this is a defense side only mechanic and you cannot buy this. Instead it is a team wide benefit for you that you can all work towards together. If the defense side can push 15 of their minions all the way into the attacking team’s weird little kinda-fountains, then the Obliterator lets loose down all three lanes. This will instantly kill every enemy in the three lanes. This includes minions and champions—even if they are Tahm Kench levels of tanky. The only safe place is the jungle. While the kills are great, the best part is that it removes the push for a second, allowing the defensive side to regroup a little. OK, back to buyable summoner spells. 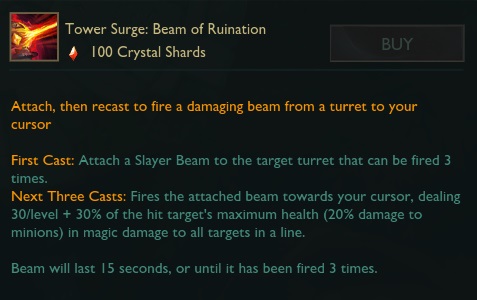 If you run up to one of your own towers and use this, your tower will become Xerath—not literally, but that would be pretty cool. As in, the tower will gain a large blast in a straight line that does lots of damage to champions—not so much to minions. It is very similar to how Xerath’s Q works but without the charging aspect. You can now aim down that lane and use the same button that the Beam of Ruination was assigned to to fire up to 3 beams of ruination. They hit hard and do a lot of damage. This is a pretty solid way to win duels early in lane, or just push your opponent out. Solid stuff.

Imagine if a tower had a Zhonya’s Hourglass and a Gangplank ultimate. Well, now it kinda does. Cast Firestorm Bulwark on a nearby tower and it will become impervious to damage while also raining hellfire down on everything around it. This is super helpful when your tower is about to go down, although it does have a brief recharge time afterwards.

This lays down a field that will slow champions and root minions inside. Use this when you are in desperate need of a break or you want to make your enemies sad.

Despite the name, this is not a laser tag arena from the early 2000s—which is disappointing frankly, Lux would be killer at laser tag. Instead it is a zone that allows you to flash inside of it. Since there is no flash in this gamemode, this thing is pretty helpful. As long as you are inside of the field you can cast flash repeatably on a 1 second cooldown. Neat! This is nice for escaping over walls, ambushing people, starting highly mobile teamfights, and giving yourself a headache. Make Kenny Loggins proud, jump into a fight and turn your Flash Zone into a Danger Zone.

Keep in mind though that while you are in the zone—not laser tag—you cannot use any other defensive summoner spell. I definitely tried to get fancy and use my Flash Zone to get into range of a dying turret so that I could use my Firestorm Bulwark to save the day. I ended up just repeatably flashing until my untimely death and it was a real bummer so, learn from my mistakes.

Defense side will get crystal shards passively over time, by killing enemy champions, every time a minion makes it into the attacking side fountain, and when the tier 2 turret goes down. 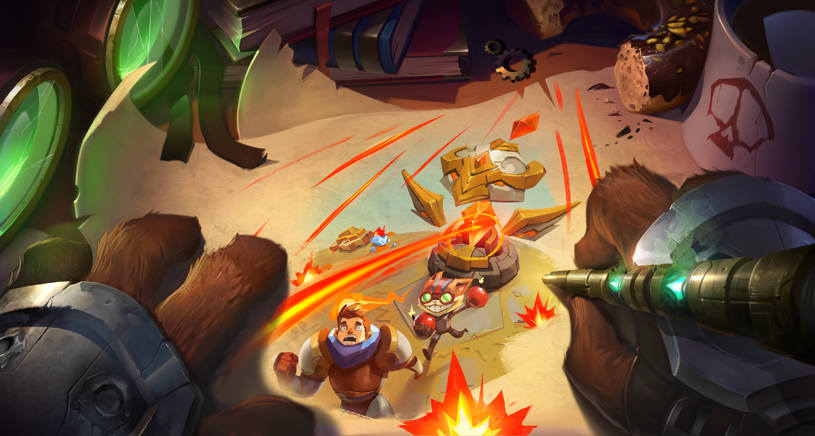 This gamemode is certainly unique, I will give it that. The first match of Nexus Siege that I ever jumped into I was team 1, and I was playing Yasuo. I did not have a good time, mostly because I was completely and utterly lost. Our time was long and when we switched sides we got steamrolled. Don’t be like me. Remember to buy your summoner spells every time you back and don’t sit in fountain reading their descriptions for most of the game.

When I had learned what was what I actually found that I had a great time in this gamemode, and writing about it now I am actively getting excited to check out more of it. I don’t know if it will end up being a classic game type that people clamor for like U.R.F. or One For All, but I am fairly certain that it won’t go the way of the over complicated and obscure Black Market Brawlers.

Good luck Nexus busting this weekend, and try your best not to lose.

*in game images pulled from Surrenderat20.net and Riot Games